Forgive Me, Brothers-in-Arms! At This Point, Just Let Me Announce It~!!!

Good afternoon. This is Shigeta of Zoukei-mura.

I went to EAA AirVenture OshKosh, which I have always dreamed of attending. I returned from those four days, in which many, many airplanes danced in the deep blue sky, feeling as though I had been living in a dream.

Due to unusual weather, this year’s OshKosh began irregularly, with the all of fields surrounding the airfield flooded by water.

Because of this, it seems that a large number of planes that would usually have been in attendance were absent, but for me, for whom this was my first time attending, the presence of so many real airplanes was overwhelming to the point of near-insensibility.

The sounds of propellers slicing the atmosphere, that characteristic engine roar when the nose of an airplane swoops up out of a dive. From 10 o’clock in the morning until 6 o’clock in the evening, various events took place for the entertainment of the attendees.

On the grounds surrounding the airfield, owners and their families gather from all around America, and all the participants settle in to enjoy these several days with all their loved ones, with many different types and sizes of RVs and campers all spread out~~~ into the distance, parked into not a city of tents, but a city of campers. It opens up before you like the vision of a small city of the future.
If you ask, it seems that attendance reaches around 80,000 visitors per day. From child to adult, everyone enjoys a daily life filled with airplanes. I’m sooo jealous~!!

Moreover, and this is something I realized once I attended for the first time, many different types of workshops take place on the grounds. The venue is a huge tent, in which many attendees gather!

When I tried peeking around, like, oh, what’s going on, I was shocked! It’s true. All over the place, in-person lessons in the manufacture, repair, and restoration of real airplanes were taking place. Inside were lectures on airplane history, how to get your pilot license (single engine, twin engine, jet, etc., etc.), and more. Of course, also on this day, an amazing number of airplane manufacturers were exhibiting from flashy yet stylish booths.

Even I, who doesn’t have a pilot license, wanted a whole bunch of things!!

And what’s this, a newspaper just for the show, published daily on the grounds!! Moreover, inside that newspaper, I was shocked to see that plane that I’ve always wanted and wanted, being listed for auction!!
Mixed in with the T-6, T-28, P-51, TBM, and F4F, what, even that Cutlass appeared in the listings. The actual airplane. Mid-restoration. It’s so beautiful!! I really want it!! All that night in bed I agonized over whether to bid or not…..and then, finally, I decided to~~~!! 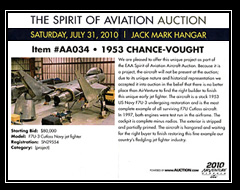 That’s right! I will make that Cutlass, the genuine article, into my souvenir~! And I seriously went to the auction・・・・・・・・・. Despite that, disappointment! Setting the final bid price aside, it was just prior to the start of the auction that the expectations of the seller became clear. The seller was some museum, and having tearfully listed the plane in order to raise funds, was searching for a place that would be able to complete the restoration on the plane.

Indeed!!
My senses returned, and I considered the matter rationally. I am nothing more than the manager of a small Japanese hobby shop.

Even in the case that I were to win the final bid, finishing the restoration would definitely be impossible. And so, I tearfully gave up on bidding. And I was truly in tears.

And yet, looking back at it now, even if I acknowledged the impossibility at the time, why didn’t I at least put in one desperate bid~!! is what I think as I run my fingers wildly through my hair whenever I remember.

Such things, and other things, made my week at OshKosh into a memorable week.

The ends of the sky in which cumulonimbus clouds hover, the moment in which the shadow of an airplane disappears from your field of vision. Harsh (?) reality awaits me once more in Japan.

Joyous, joyous progress reports on the SWS No. 2 await me. When I think of that, my heart beams once again!

“How about that! Here I have the guaranteed pleasure found in model airplane production! *weeps*!!” and, unthinkingly moved to tears, for some reason I am filled with triumph. Sniffle!! Even during my trip, I was unable to forget my Ta 152 for even a single moment. If it were possible, I would have loved to see it flying the skies of Oshkosh! Sniff!

The finished Test Shot that I had so looked forward to also looks even better than I had imagined in its completed state.

With those long main wings, of which, “Wow~~ this is it, the Ta 152 itself!!” can truly be said, firmly attached, that cool-looking, gallant silhouette awaited me with a sweet smile.

Also waiting were the reactions to these weblogs of mine. Truly, thank you so very much for your many affectionate comments.

I am a truly blessed person, that so many people are passing their eyes over even my clumsy, monologue-esque compositions.

When I returned from my trip to Oshkosh, I was hospitalized the next day for polyp removal surgery on my vocal cords.

In that blue sky, I saw the black silhouettes of many airplanes, flying in formation into a steep climb.

At that time, an idea came upon me from within my heart. “Yes, when I leave the hospital and get back to work, I’ll tell all the fans about SWS No. 5!! We can all enjoy SWS together!!” ・・・・・・・like so.

Which is why my previous “deranged blog” became what it is.

The beautiful cumulonimbus clouds told me, “Do like like that.” But I’m sure everyone will be angry with me again~.

However, when I told everyone of the Scale Model Development Team what I intended, they all unexpectedly smiled.
“I can feel my courage welling up,” said N-kun with a brave smile.
“I also feel my motivation coming on,” said T-kun with a smiling face. M-kun even comforted me with the unusual words of, “This is as expected.”
“This….what is this??”

“I see~! Yes, that’s right, isn’t it~ everyone’s doing this work, no, everyone came to Zoukei-mura out of love~.” I’m glad.
I’m so glad. So much time lost to such unnecessary anxiety~.

So, that said, case closed? No, no, now we can truly begin.

In which case, to all the concerned SWS fans in the world, let’s just announce No. 3 and No. 4 all at once.

In other words, that’s what was decided!!

If you’re under 50 years of age, then I don’t know, but if you’re over 60, then you’ll be all right. After all, you’re at an age where there’s nothing frightening left in the world. It’ll be okay, so don’t worry!!

All ri~ight! Having come this far, I would please have you listen now. After all, my dreams can also be your dreams.
Even if the order of realization of those dreams can differ, I don’t think I’m mistaken when I say that if you listen, you’ll end up smacking your knee, “Pop!” in understanding.

So, the venue for the announcement will be the meeting place for the 1st Regular Meeting of the SWS Fan Club, and you will hear the information from my own lips.
As for the time and place for the Regular Meeting, it seems that Developer T will post a notice on the Zoukei-mura blog within the next few days.

Oh yes, for those of you that purchased Shinden and still haven’t sent in the survey postcard, or declined to express interest in joining the SWS Fan Club. Please definitely take advantage of this opportunity to complete the admission process. If not, you won’t receive any of the information about the Regular Meeting.

At the Regular Meeting, let’s all talk together, with me and the rest of the Development Team, about progress updates on future SWS developments.

I look forward to that day from the bottom of my heart. 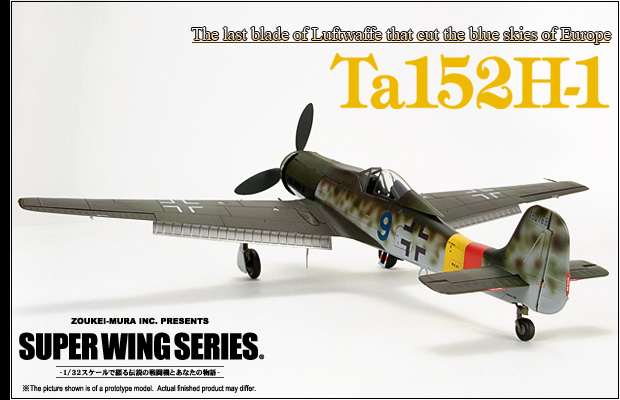