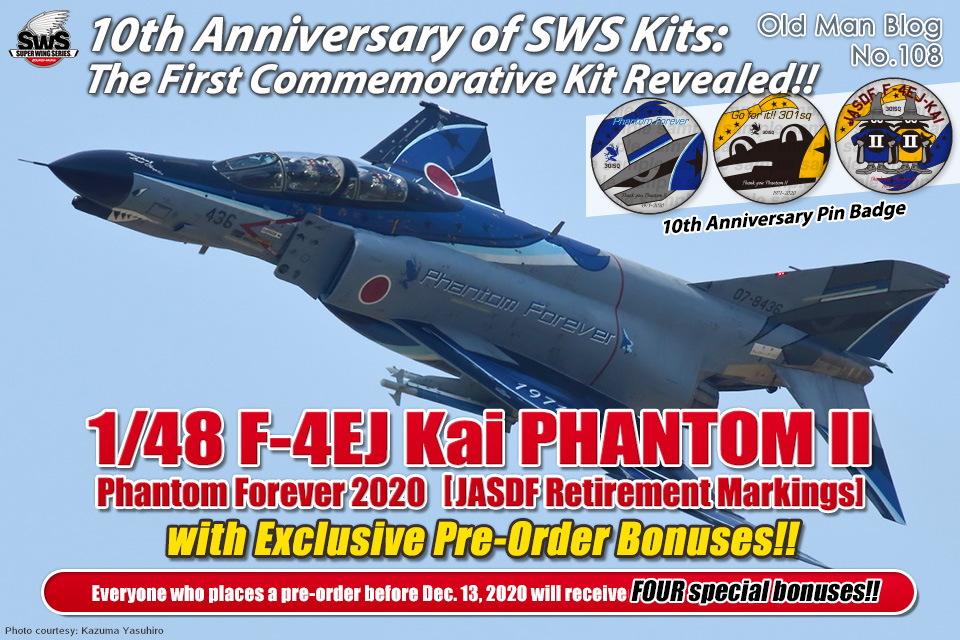 This product has been sold out, and we are no longer accepting orders.
Thank you for your pre-orders!

Thanks to all of your support, we have made it to this landmark year marking the 10th anniversary since the creation of Zoukei-Mura’s plastic scale model kit series, the Super Wing Series (SWS).

Starting with the 1/32 Shinden and spanning 34 kit subjects including this upcoming 1/48 F-4EJ Kai kit, it seems like it has been such a long time since SWS began… and yet also as if it was only yesterday. These past ten years have been a truly happy and blessed time for us.

Above all else, it was the heartfelt support for Zoukei-Mura SWS kits from scale model fans worldwide that made the development of this series possible. On behalf of everyone at Zoukei-Mura, I would like to thank you all deeply from the bottom of our hearts.

So, created in commemoration of the 10th Anniversary of SWS, our special edition “1/48 F-4EJ Kai PHANTOM II Phantom Forever 2020” will be exclusively available to individual customers and SWS Friend Shops (retailers) who pre-order in advance. Everyone who pre-orders will enjoy FOUR special bonuses and receive their kit earlier than the regular version of the kit. Shipments out from Japan are planned to begin from January 8, 2021. As one of the four special bonuses for this kit, it will be sold at a special price. (Pricing will vary for VOLKS USA and Friend Shops due to currency rates and international shipping and handling fees.)
You are welcome to pre-order as many as you like, there is no limit on kits ordered per customer!

(Please note that the delivery schedule for pre-orders placed with VOLKS USA and SWS Friend Shops will be different due to international shipping times. Please ask the store where you pre-order for their schedule. Of course, all of the special-edition kits will include the same bonuses as the kits ordered directly from VOLKS in Japan.)

We will continue celebrating the 10th Anniversary of SWS until the end of 2021. We are planning more commemorate kit releases for this special anniversary. Please look forward to it!! 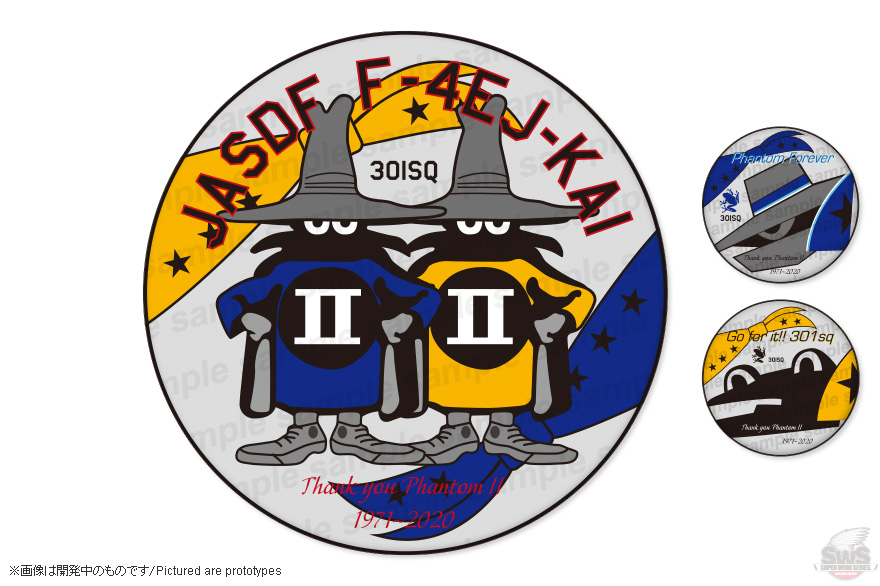 ▋The exclusive pin badge designs feature “The Spook,” the cartoon ghost emblematic of the F-4 Phantom II and as beloved as the aircraft itself. Check out the colors symbolizing the commemorative flights in 2020 (blue) and 2019 (yellow)!

Bonus #1
Exclusive Phantom Forever 2020 Box Art (F-4EJ Kai JASDF Retirement Markings)!!
(We plan to release the regular version of the F-4EJ Kai in Spring 2021 with different box art. Keep an eye on our official Zoukei-Mura website for more updates!)
Bonus #2
Early delivery for pre-orders, starting on January 8, 2021!
(This is the delivery schedule for Japan only. Please note that due to international shipping, the delivery schedule for VOLKS USA and overseas SWS Friend Shops will be later. Please ask the store where you placed your pre-order for their schedule.)
Bonus #3
Exclusive pin badge included for free with every F-4EJ Kai “Phantom Forever 2020” kit!
(There are three possible designs, each related to the F-4EJ Kai. One will be included at random in each kit.)
Bonus #4
Sold at a special price of 6,800 JPY (before tax) to celebrate the 10th Anniversary of SWS!
(The regular version of the kit will be sold for 7,500 JPY.)
*This is the official retail price at the Japanese VOLKS Online Store and VOLKS stores in Japan. Pricing will vary for VOLKS USA and Friend Shops due to currency rates and international shipping and handling fees.

This Special Edition kit has a limited production, so please pre-order as soon as possible to ensure that you can receive this kit.
We will stop accepting pre-orders when we have reached the maximum supply limit.

Check out the evolution from F-4E to F-4EJ Kai!! 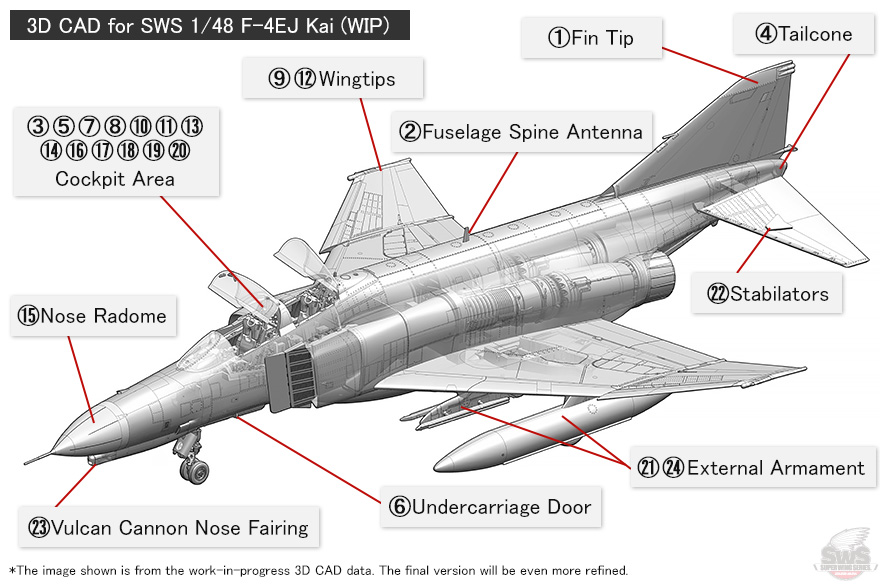 ▋Includes all-new runner specially designed for F-4EJ Kai based on examination of the actual aircraft! Check out the optional selection parts included in the common runners with the popular SWS F-4E Early kit (now available for purchase)!

We have carefully replicated the F-4EJ Kai’s characteristics in great detail.
Let’s compare it with our popular F-4E Early kit!!

All the careful attention to detail and passion for research that one would expect from SWS!!
Our tireless research, including examination of actual aircraft, allowed us to recreate every unique detail of the F-4EJ Kai distinguishing it from the SWS F-4E Early kit (which I am sure you have already obtained for your esteemed collection), the F-4E Late Production type to be released later, and all of the other F-4E variations.
Even the passionate Phantom Phanatics like yourself are sure to be satisfied with the resulting kit!

In addition, by correctly selecting the right optional parts from the shared runners with the F-4E Early kit, you can replicate even the smallest differences between the F-4E Early and the F-4EJ Kai, including those that have been overlooked up until now.
I believe that it’s these small things that bring the most joy and excitement, the kind that can only be appreciated by scale modelers.

I am so honored and pleased to be able to bring such a splendid kit to you all in celebration of the 10th Anniversary of SWS. 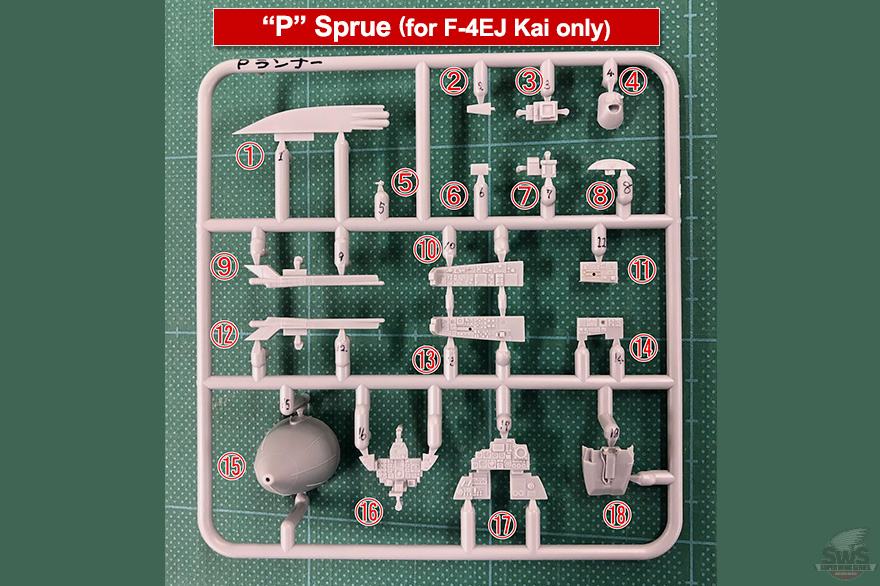 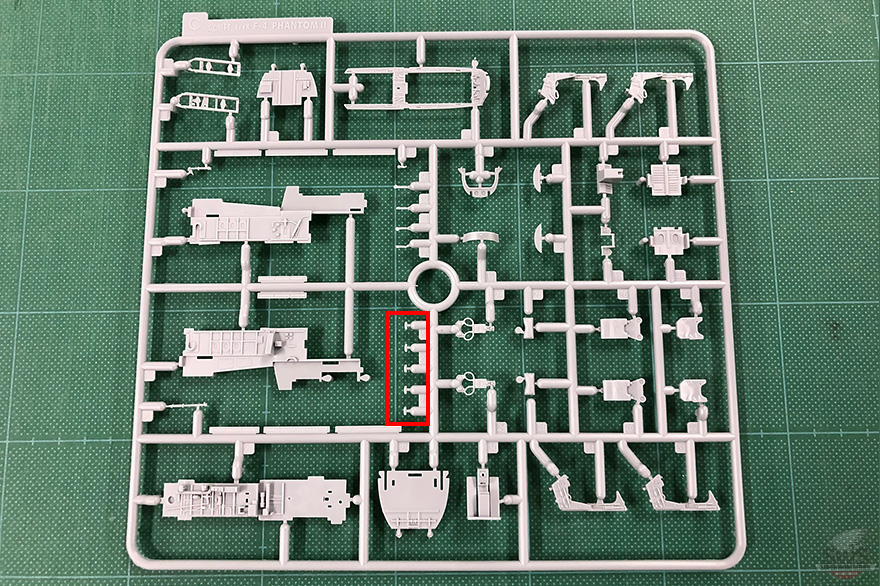 HUD combiner (parts 6 and 7 on the clear L sprue):
Changed to be two glass projection parts. 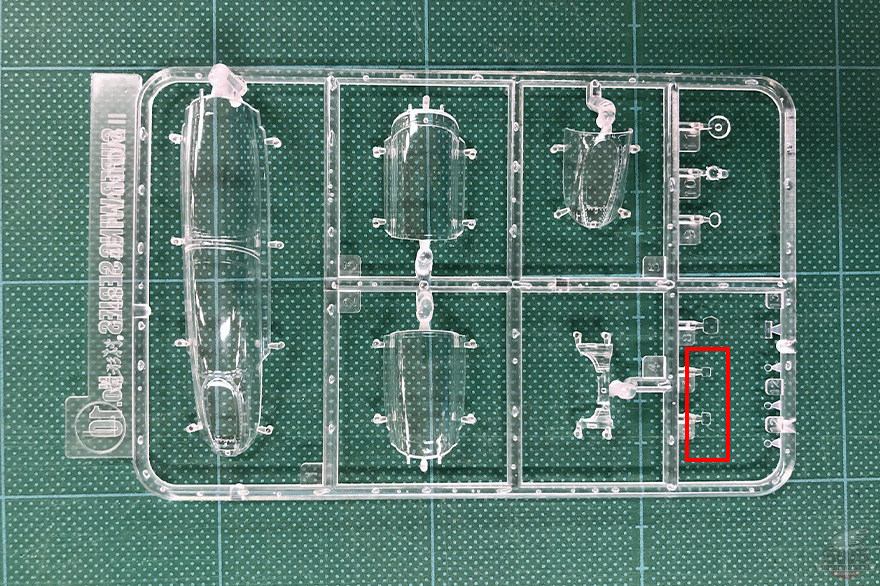 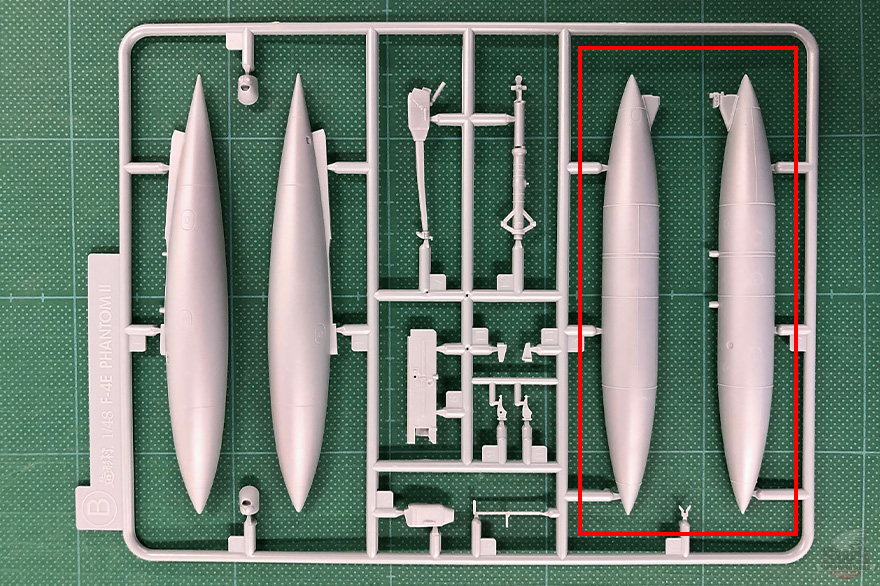 Stabilator reinforcements (parts 24 to 27 on R sprue):
Added reinforcement panels on upper and lower surfaces for both sides. 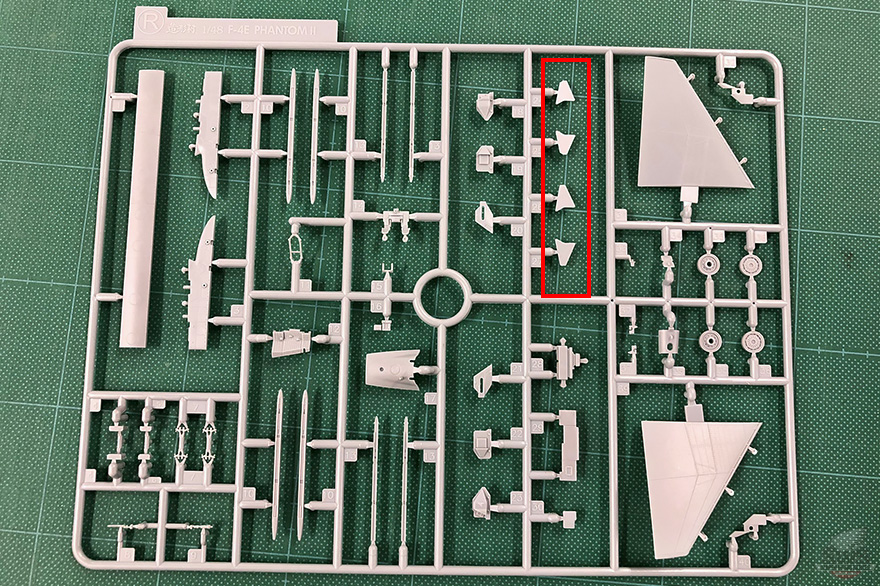 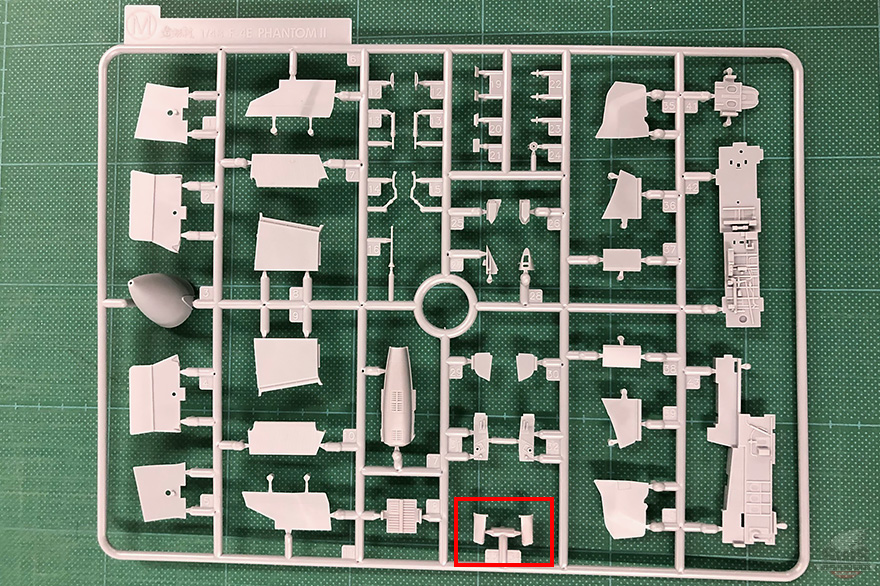 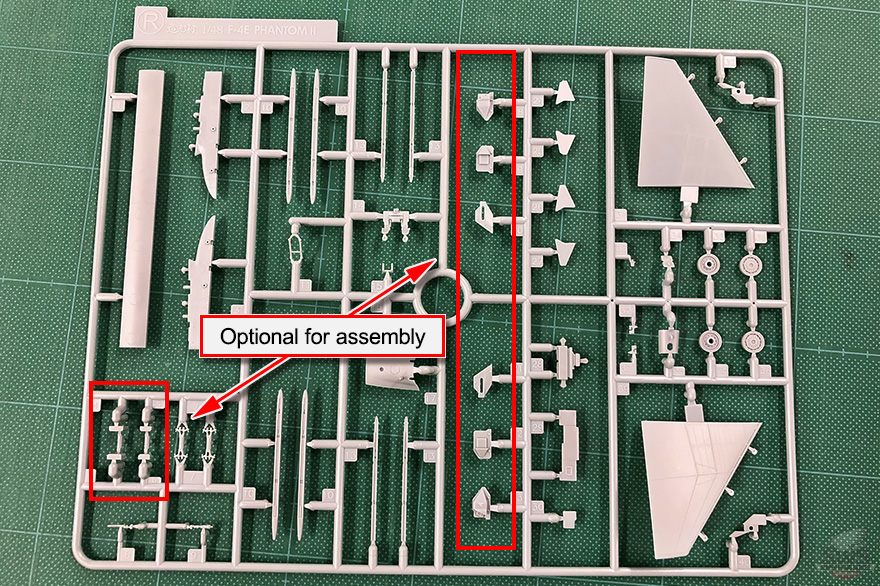 I don’t usually advertise this, but…!
The SWS 1/32 DOUGLAS A-1H SKYRAIDER kit is almost all sold out! 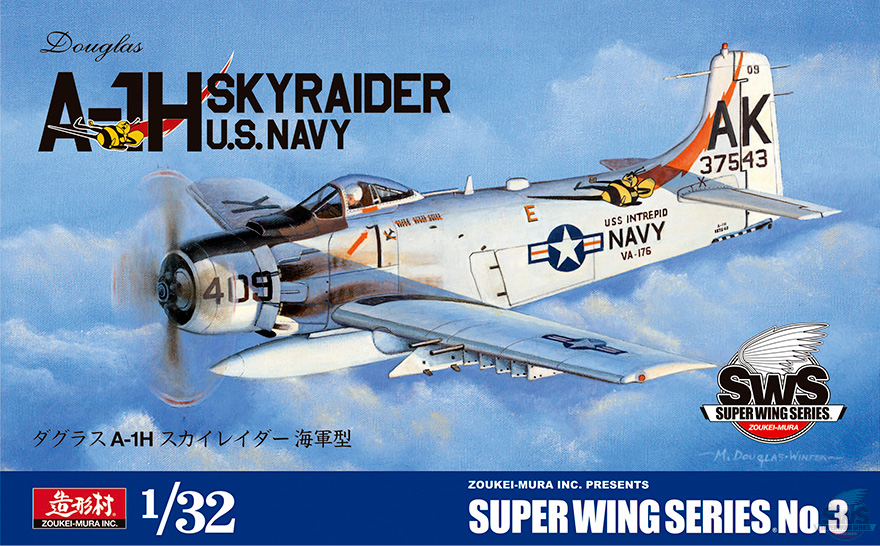 So to send it off with a last hurrah,
we are offering it as a special bargain set!

The A-1H SKYRAIDER kit is available for purchase as a combined set with its weapons and bombs, which were usually sold as a separate optional kit—all for no extra cost to the original price of the Skyraider kit, as part of our 10th Anniversary of SWS celebration.

Our stock is running out fast.
Skyraider fans, don’t miss your chance! 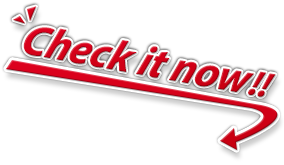 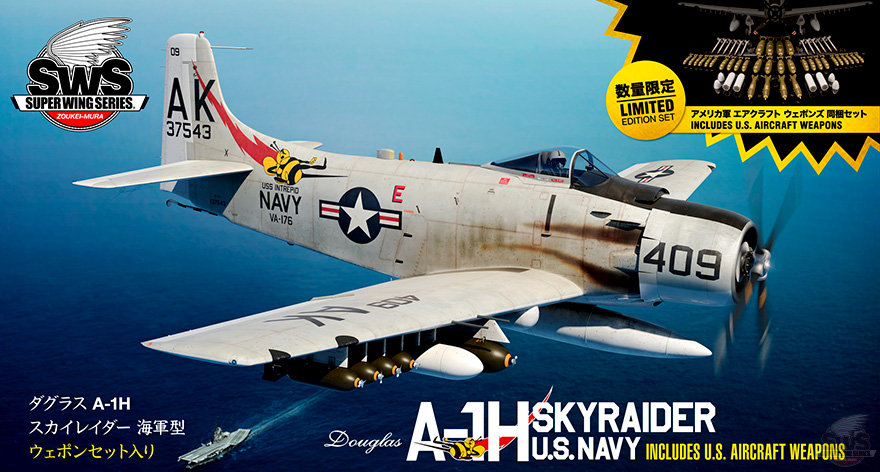 My SWS brothers, I truly hope that all of you are doing well despite this global pandemic.
The scariest thing about the new coronavirus is that elderly people with pre-existing conditions are extremely at risk—it is said that if those who are vulnerable are infected, the effects of the virus are dire, causing severe pneumonia.
Please, at least for the time being, keep carefully washing your hands, stay away from crowded areas with many people, and stay safe, so you may keep enjoying building scale models (including SWS kits) for many, many years to come.

As long as you stay healthy, you will be able to enjoy all of the new SWS kits that will continue to be released into the future. Please, stay away from the virus and spend your days in good health and happiness.

In my next blog post, I will reveal the F-4EJ Kai kit with JASDF markings built by our famous pro-finisher Naoki Kobayashi.

Please look forward to it!! 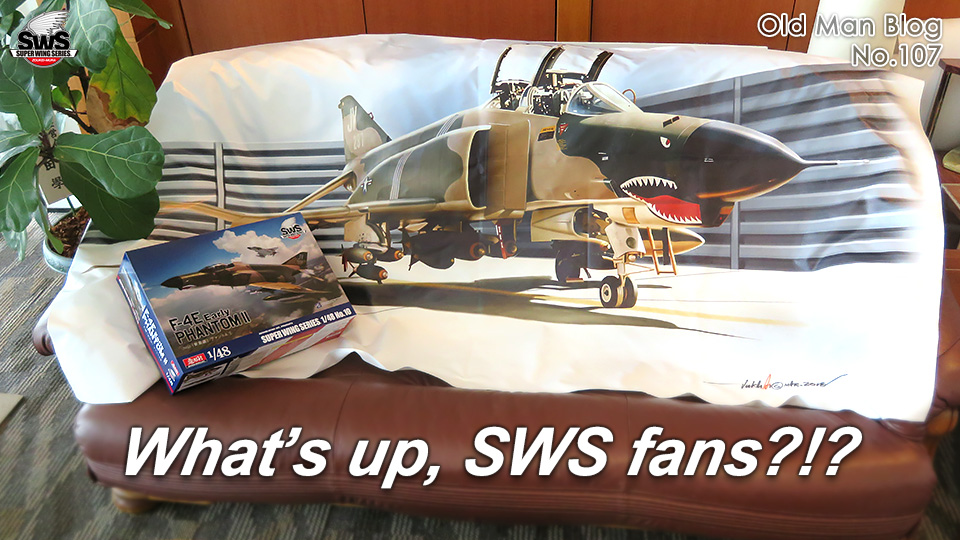 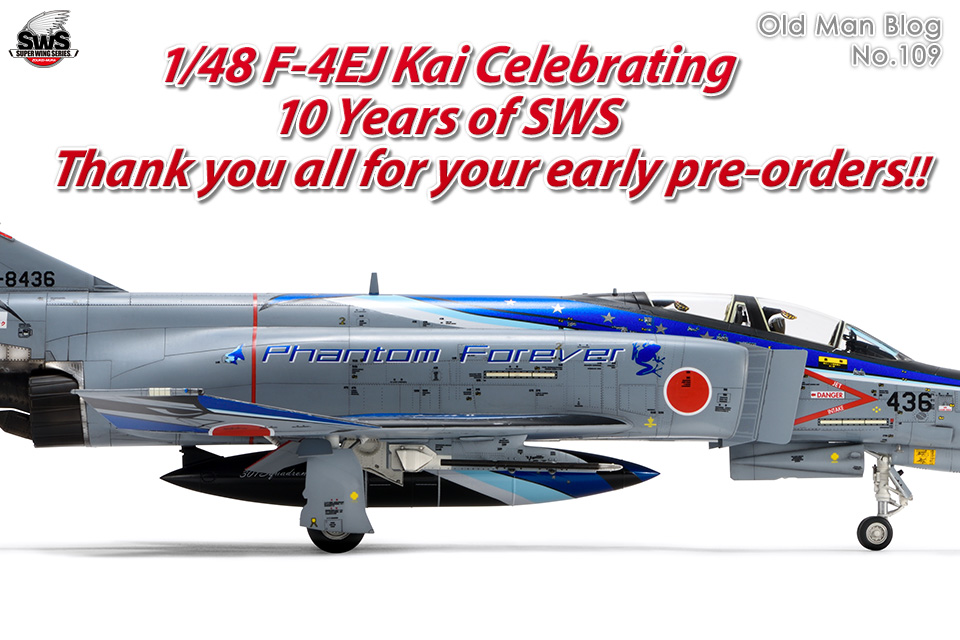