I would like to offer my most heartfelt sympathies to everyone who was a victim of the Tohoku Pacific Ocean Earthquake that occurred on March 11th.
I offer up prayers for happiness in the next life for all those who passed away, together with my sincere condolences for all the bereaved families left behind.

I truly hope and pray for your speedy recovery, as well as the swift return of your health.

This was truly an earthquake disaster of epic proportions!
Japan right now has been struck with a triple disaster of earthquake, tsunami, and nuclear accident, something that only happens maybe once in a thousand years. It really is difficult to know what to say right now to all those who have been affected by the damage caused by this disaster.

We here at VOLKS GROUP are working hard right now to carry out relief and support via any means possible. If there is anything we can do, whatever it is, just ask us.
And for the donations needed for recovery, we've set a target total of 100,000,000 JPY, even if it takes us years to raise, and we're exerting every effort to be able to achieve and send that money as quickly as possible.

Please everyone, let's all join forces and do our best, together.

We also received many, many warm and kind encouragements that filled us with strength from SWS fans all around the world who heard of the earthquake and came to my blog.
I'd like to borrow this space briefly to offer you my deepest, deepest gratitude. Thank you so very much!!!!

Also, rescue teams from countries all around the world came rushing to our aid to provide support with the earthquake, tsunami, and nuclear accident! Every time we see their brave and very welcome activities on the daily news reports, the victims of the disaster and all the citizens of Japan continue to be moved to tears with gratitude. Thank you all, so much!! We'll never forget what you've done until the day we die!

And the many people who, even though they are victims of this disaster, even though they have lost their dear relatives and their valuable personal belongings and assets, even though everything and anything was swallowed up by the tsunami, still continue to remain stout of heart.

The many people who, with no concern for the danger to themselves, have courageously sacrificed themselves to save many other people.

Even before the great earthquake, I held great respect and honor for all of those in Eastern Japan for their ability to always do their best without faltering.

And afterwards, even as they lived their days in places of refuge, anxious and in need, that 'Japanese spirit', if I can call it that, that spirit of mutual cooperation, could be seen all over the place.
The spirit of cooperation and orderly conduct that everyone showed in the midst of all the sorrow and misfortune, as if they could shield our eyes from the worst, is something that deeply awed and moved all the citizens of Japan, as well as arousing our sympathy.

Furthermore, if we're talking of the relief effort, I cannot overlook the active efforts of the our own Japan Self-Defense Force.

Their response to an emergency forged of habitual training and their intense sense of responsibility towards their duty was at once obvious in their perfectly regulated actions. It was painfully obvious that after all, they are the ones we can most rely on in an emergency. Thank you to all of the Self-Defense Force personnel!

And also, thank you to all of the policemen who worked to provide emergency guidance and disaster relief!

There were also many victims amidst the firefighters and public workers. When hearing that there were many people who stayed at the scenes till the very last, providing emergency guidance, and as a result were caught up in the disaster itself, I simply cannot find the words to express my gratitude. Really, truly, thank you so much!!

Even though we have been visited by such an unprecedented disaster, we, the people of Japan, will absolutely never, ever forget that there were so many wonderful people! Thank you so very much.

And in the midst of such a huge disaster, the damage to VOLKS GROUP here in West Japan amounted to some of our stores having to stop business temporarily, and even the damage there was limited to an insignificant amount. Together with the thanks I give to god for this reality, I'd like to firmly embrace the significance of that.

When you think about it, we, this country of Japan, have overcome all manner of disasters and difficulties even before this. From natural disasters such as earthquakes, typhoons, and plagues, to wars and times of great upheaval; and each time we have paid the price with a great many victims.

During World War II, almost all the major cities in the country had their fields razed by the damage caused by bombing raids, and in the final stages the cities of Hiroshima and Nagasaki were hit by atomic bombs.

And yet despite all of that, our country of Japan, and we the Japanese, still recovered.

Even despite this huge earthquake, the kind of which might or might not only come once in a thousand years, we will show that we can recover. I would like to ask all the people of Japan, and all of the SWS fans around the world, to please, now more than ever, provide Japan and the Japanese people with your support.

Japan, the Japanese people, and ZOUKEI-MURA and SWS will keep on doing their best from here on and in the future!! 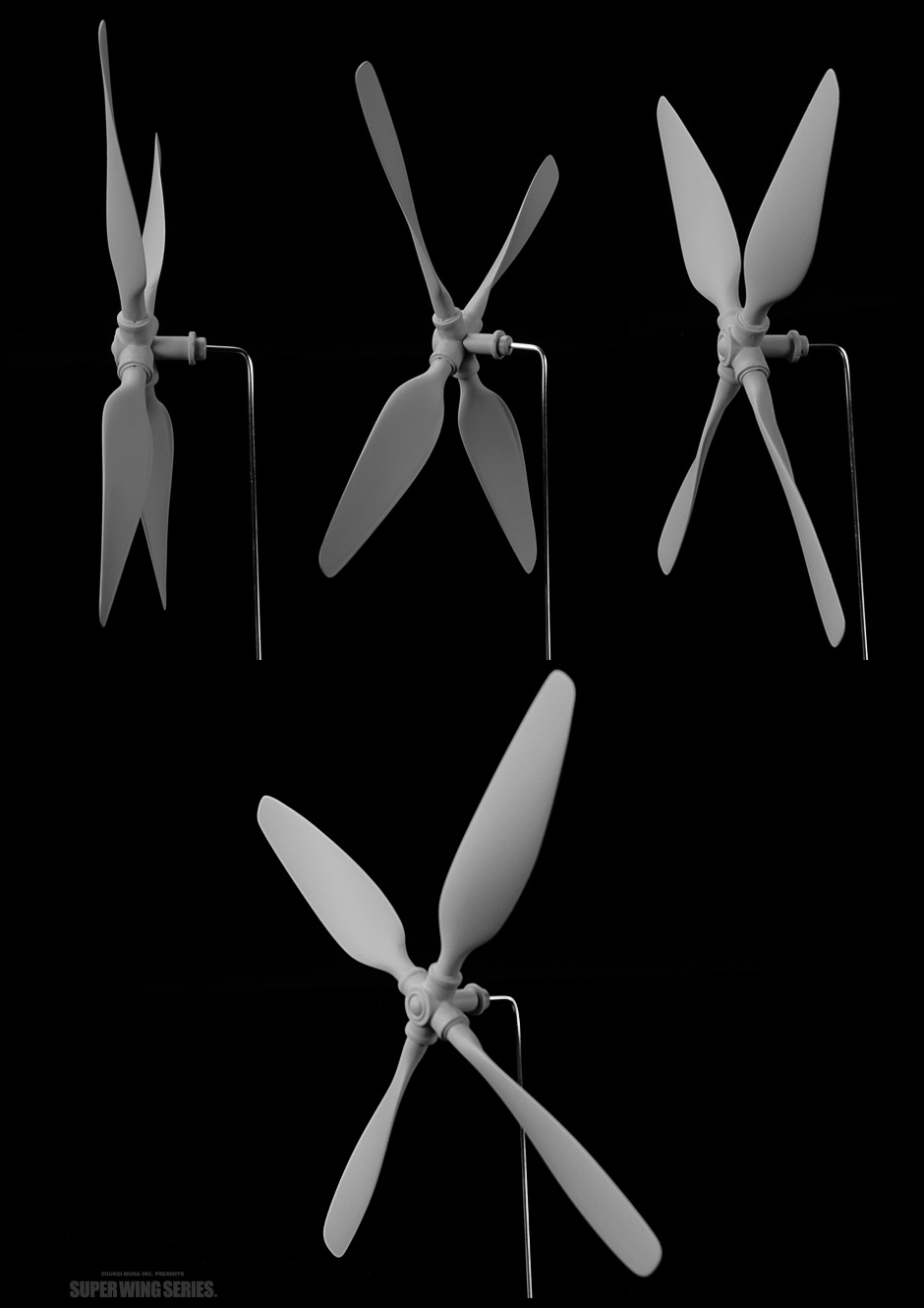 An Aero Products propeller has been decided upon.

The propeller is the lifeblood of a reciprocating engine craft. I think I've talked previously about how when I hear the word 'propeller' for some reason I get quite emotionally unstable.

This is the same even with the Skyraider propeller. A kit is certainly not something that you just assemble as it comes and then it's finished. A propeller is something you carve for yourself. With the collected data and photos at one side, you just carve it down single-mindedly to match that image. As a result, you can say, this is my Skyraider propeller!!

Or at least, that's what this is a photo of. The shape of the level surfaces and cross-sections were given priority in the kit's design, but by modifying the tips of these raw parts to be even thinner and lessening their twist, I finished them up exactly in the image of the actual craft itself.

The propeller of the actual craft is extremely powerful, and yet conversely quite delicate.

I've finally gotten my hands on that exact Skyraider propeller.

Please challenge yourself as well, and try modifying the propeller so as to better recreate your own image of the Skyraider.

Just, be very careful that you don't modify it too much and make a total mess of such an important part.

Also in the near future, in the next blog I'm at last going to introduce the central parts of the Skyraider, the details of the R3350 engine and the landing gear that supports its large build.

Be sure to look forward to that!!!!


If you have any opinions, questions, or requests regarding the SWS, please don't hesitate to let us know. 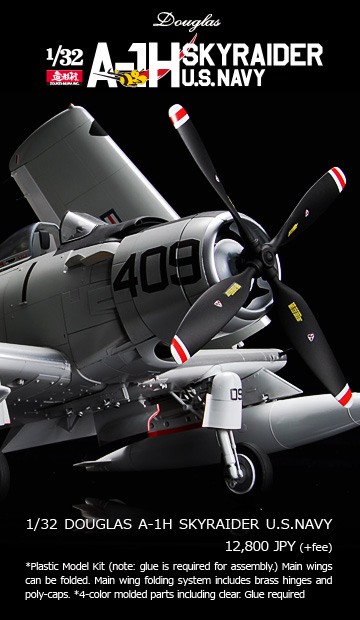