Good evening? This is Shigeta of Zoukei-mura. Every day continues to be hot, and I wonder how all of you, our dear SWS fans, are getting along in the heat.

In spite of it occurring every year, it never ceases to amaze, how hot it is in the summer. It always has been, ever since ancient times. Having lived relatively longer than most people, I can firmly declare at least this much: Summer is hot. And so, we all continue to endure the long days together.

When I was young, there was no such thing as air conditioning, no matter where you looked. Even the train cars only had small electric fans directed at the passengers, spinning with a hum from overhead.
It was so very hot, nearly to the point of provoking violence. At home, the closest things to air conditioning we had were paper fans. Even those were primarily for the adults' use, and children were not permitted to touch them. After all, if the children were allowed to lay hands on them, they would promptly be reduced to nothing but bamboo splinters from mock-swordfighting.

From Showa 30 to 40 (1955 to 1965), a rather long period of time, forget things like television and video games, there was absolutely nothing for children to play with during all that time.

Which is why children during the summers of that time would frequently go fishing in rivers and ponds.
Since they lacked swimwear, the boys would all go swimming naked. Eh? You wore red fundoshi? Hm~m, you must have had quite a wealthy lifestyle, then.

When I was a child, I was called the Master of Cicada-Catching. You see, I loved anything that could fly through the sky under its own power, so I had a lot of experience with things that can fly.

And so, now, when the heat becomes truly unbearable, lately I've been coping by imagining the Ta152's gallant figure in my head.

Yes, my beloved plane, its deep black slicing across the blue skies of Europe as it stoops into a nose dive with that resounding, high-pitched roar. A nose dive in defiance of the -45° Celsius temperatures of the high altitudes, which it bears with grace. Just imagining this brings a refreshed feeling to my heart. Even the heat flies off somewhere for a moment. I do this just about anywhere.

The other day, while immersed in this state, while riding the train I unconsciously began turning the palm of my right hand in large, counterclockwise revolutions. Every now and then, don't you also do this kind of thing unintentionally?

It was then that, I think out of some kind of misunderstanding, the young woman who was sitting in the seat directly facing me quickly got up and walked away with a tic in her eye.

No, you're wrong, it's not what you think~! You pull the stick to the left in counterclockwise revolutions, and you give power to the foot bar with your right leg~ and then you completely open up the throttle lever, don't you see~!

Even though I shouted such things within my heart, it's not like such talk would make people understand, and an atmosphere of deep silence settled around me. Even though all I did was play at being an innocent juvenile delinquent - excuse me, a daydreaming young airplane fan…….

In any case, it's been one year and six months since we began work on the SWS Ta152. In that period, I wonder how many times my hand has performed that revolving motion? Now that I think about it, ever since I got back from the OshKosh air show, that motion has gotten more frequent than it was before……. Maybe?

But it really is fun, isn't it~. With this, I can fly away in whatever plane I like to wherever I want.

The proof is in the pudding. When you're going through times of sorrow or hardship, please definitely try it. I assure you that your feelings will reverse and you'll feel completely uplifted.

On top of that, if you've already pre-ordered the SWS Ta152, the effect will be doubled. I, who do this all the time, give you my pledge on that.

Eh, you already do things like that all the time!? I see, I see. When you did it, did you also get walked away from~? Then you are my senpai (senior/predecessor)!

That's right, it's not really something that outsiders would understand, but when all is said and done, the attraction of the Ta152 lies in the wings, doesn't it, the wings!
The lo~ong, lo~ong W-I-N-G-S!

Even for the SWS Ta152, what do you think of the strength of these powerful main wings that jut out from each side!
I think that with just these, even those who aren't normally fans of German planes will be completely swept away by the Ta152's good looks.

But, senpai. If you obtain the SWS Ta152 kit, don't just build it all at once, make sure to calmly dry-assemble the main wings to try and confirm the fit first, okay?

Because even with a simple dry assembly, the accuracy of the "anhedral angle" is, of course, as you go along the length of both the main wings, reproduced in both the metal molds and the kit, down to the slight "kink" in the trailing edge. It's really too amazing!

Truly, this is what makes the SWS! This is where the true level of Zoukei-mura sculpting shows itself! You should be able to see for yourself that these words are not by any means an exaggeration. Depicted is an extremely beautiful, but unusually natural curve, including the distinctive twist in the Ta152's trailing edge.

This aspect, as well as the pitch angle and blade thickness of the propeller, must be perfectly set, or you become unable to experience turning, descending, and climbing, to say nothing of the intensity of a dogfight; needless to say, these are exceedingly important elements.

Also on the main wings, you mustn't forget to check the reproduction of shape of the cross-section. Unexpectedly, until now, even among people who are extremely fussy regarding the shape and the mold of the level surfaces and the appearance of the rivets, there have been few who have remarked on the shape of the main wing cross-section.
In other words, as long as the lines and the rivets appeared to be molded beautifully given a quick glance, they were OK with just that.

Naturally, in the SWS, there was no overlooking of the main wing cross-section. We recreated with precise application of the results of all of our research. Where the wings are concerned, the shape of the cross section and the kinked trailing edge are what originally acquire the lifting power that sustains the aircraft in flight, and so cannot be overlooked.

Of course, even in the SWS, these aspects of the main wings are only part of the plane's ground posture. However, where both the main wings are concerned, whether the kinked trailing edge is there or not, and whether the shape of the cross-section can be said to be the same as in our research - I don't know whether to call it a gut feeling, but being completely honest, the intensity is completely different, in a very mysterious way.

The wings provide the lifting power, but in addition to transforming the plane's posture, they link the body and the engine together, they can be loaded with weapons, and furthermore, they can be completely filled up with fuel, and they are an integral part of take-off and landing. Unlike birds, the wings themselves do not actively flap, but they are part of the core that gives the plane greater mobility and function.

I hope to deliver this message from the Zoukei-mura Development Team, held within these words, directly to you.

In that sentiment, I'll try out the Ta152's counterclockwise revolutions today as well.

Senpai! Please try it with me!! 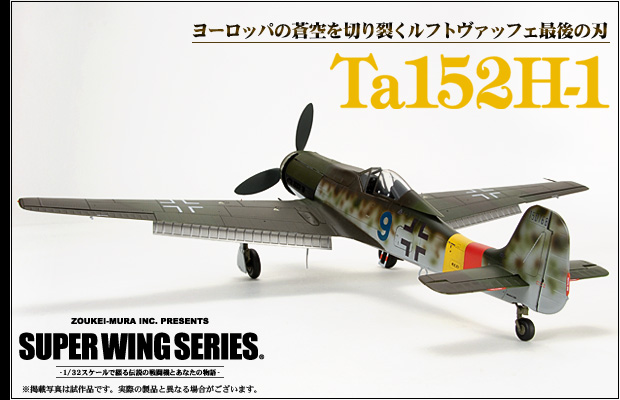